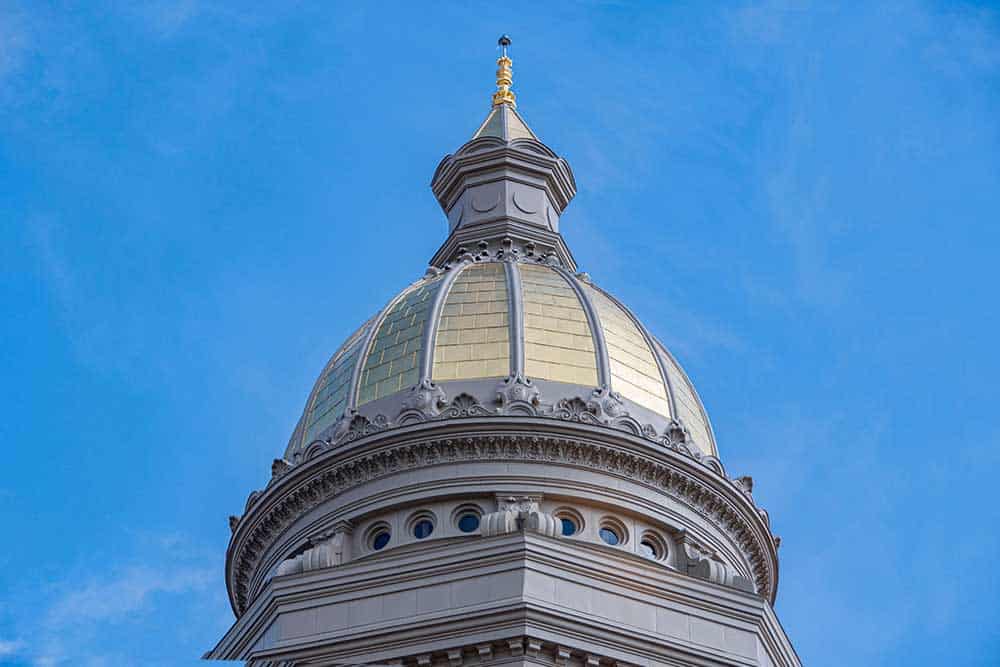 Work on the Wyoming State Capitol—which included restorations on the Capitol Building, a National Historic Landmark that was originally constructed in 1887—began in 2014 after the state Legislature approved a $299 million budget cap for the project.

Among the restorations needed to the Capitol Building were major repairs to its exterior. As part of those repairs, a new copper dome was to be fabricated, installed and gilded.

We were contacted by J.E. Dunn Construction in 2015 and, as part of the project, Renaissance Roofing (Missouri) was responsible for the fabrication of the new dome and finial as well as the rest of the sheet metal work on the exterior of the building. The gilding work was included in Renaissance Roofing’s scope and our contract was with them, which we were awarded by merit, not price.

All the existing copper on the dome was replaced. Our job was to prepare, prime and then apply a new layer of gold leaf to the copper surface. The gold leaf for the project was specified as 23.50KT, which is an alloy of 98% gold, 1% silver and 1% copper. The leaf was manufactured in Italy by Giusto Manetti Battiloro to our specifications specifically for the project and was beaten extra thick for exterior application.

This “extra thick” gold leaf is specified as 21-gramweight gold leaf, which means there are 21 grams of gold per 1,000 sheets of leaf. (Other leaf will normally be only 16-gram-weight, or even less.)

The copper was cleaned with denatured alcohol, etched followed by two coats of primer. After the proper drying interval, the surface was coated with a slow-oil size (adhesive for the gold leaf), which dries overnight. The gold leaf was applied to it the next day. (Size is only applied to that area that can be comfortably gilded the following day. At the end of gilding for the day, the next area is sized, etc.)

Among the restorations needed to the Capitol Building were major repairs to its exterior. As part of those repairs, a new copper dome was to be fabricated, installed and gilded. (Photo by: Rachel Girt)

The gilding team arrived on site in Cheyenne, Wyoming, on Aug. 27, 2018, and began etching and priming that day. Gilding began on Aug. 30. It was completed on Sept. 1.

All the work was complete except for the finial, which was fabricated by Renaissance Roofing and shipped it to the Gilders’ Studio in Maryland, where it was primed and gilded in early March 2019.

The finial was shipped back to Cheyenne and installed atop the dome. Shortly after the finial was installed, one of our gilders returned to the site at the end of March to perform touch-up on the finial and dome surfaces, right before the scaffold was taken down. On July 10, the state celebrated the restoration of the Capitol featuring fireworks and an open house for the public.

All members of the team had OSHA 30 training as well as site-specific safety training for the project. A Daily Log was maintained each day. Each layer of primer had wet-film and dry-film thickness readings recorded on every face of the dome using a notch gauge and an ultrasonic DFT meter to ensure the coatings were applied in accordance with the manufacturers’ specifications.

In addition, environmental and surface conditions were monitored twice daily using a thermo-hygrometer and infrared thermometer. These were recorded in the project log to ensure the coatings were applied at the proper thickness and within the temperature and humidity limits specified by the manufacturer. Overall and close-up photographs were also taken of each step of the processes and were incorporated into the final report supplied to the CM at the close of the project.